Still involved to this day

Current members may be blissfully unaware of the huge amounts of work that goes on “behind the scenes” between Cardiff and Met Hockey and Cardiff Athletic Club. For nearly 20 years now our interests have been represented by none other than Chris Sutton whose efforts and achievements are second to none in this area. Chris has been a long-time member of the club as player, Chairman and CAC Committee member. He is a truly amazing character whose patience, tolerance, and professionalism in dealing with the CAC committee have seen him succeed where others (like me!!) could not. His efforts are not to be underestimated and the current success of the club is in no small part due to his ongoing work and dedication. Chris runs his own business in Treforest and is a keen cyclist. A great guy on all fronts and its been a joy to have been friends with  him all these years.

The Poly of Wales Hockey Club

At the age of 18, I arrived at the Polytechnic of Wales, to study Estate Management. I had three years’ hockey under my belt in Lincolnshire… where it seldom rained and grass pitches were like bowling greens. I played for my home town, Horncastle Hockey Club, in an East Midlands league which spanned from Cambridgeshire to Humberside. 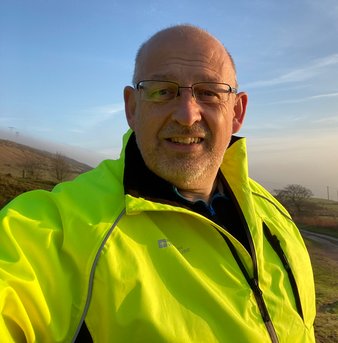 Arriving in Treforest on a Tuesday in Sept 1984, we put together a scratch side for the following Saturday to fulfil the Poly’s first fixture of that season in the South Wales League. That first game was ‘Chepstow away’ on the grass pitches of Beachley Army Camp literally under the old Severn Bridge… we won. For the next four years, pretty much every Saturday involved a minibus trip to the next League fixture. Home games were at Tyn-y-wern, Treforest Estate however I recall away trips to historic grounds at Penarth, Newport, Oystermouth, Llan & Llan (playing on Llandaff Fields followed by faggots & peas in the clubhouse), as well as less exotic destinations such as BP Llandarcy (a grass bog), Bridgend, Haverfordwest, Cwmbran, Abergavenny, and many more. In 1984 there were hardly any astros – firstly Cardiff and Swansea then a couple built in Pentre and Aberdare. Now they are everywhere but the standard surface in wet 1980s Wales was red-gra, a gritty surface that was raked and rolled and was evil if you fell heavily on it. You would spend the evening picking bits of grit out of your knees.

The League highlight was always Cardiff HC away, games played on two stunning grass pitches either side of Glamorgan’s cricket square, inevitably followed by a singsong in the first floor clubhouse. There was so much drinking after a game in those days… it was obligatory to buy the opposition a jug of beer and vice versa - then repeat. And Cardiff HC in the 1980s were hardcore drinkers, just sayin’.

Of course, the Poly also played every Wednesday - and on the important British Polytechnic Sports Association (BPSA) competition days we would have 5 or 6 coach loads of teams travelling from one Poly to another, for multiple games of rugby, football, hockey – mens and ladies, with massive nights out to follow. Great times. But we also took our sport seriously, in my first year we reached the semi-final of the BPSA Cup, losing to Kingston but in 1986 we won both 1st & 2nd XI Cups as well as the South Wales League Div 2… with success in the next two years as well.

My second year was the best hockey I played; we had a lucky combination of established players, stars coming back from their sandwich year and great freshers. We also had some high quality students playing locally inc. Malcolm Thomas, Tim Rea & Jaz from Cardiff, Phil Rumsam at Penarth, Nige Davies at Llan & Llan and Carlo for Swansea. I look back with great fondness on my time at the Poly and the camaraderie & friendships. Being so far from my home meant that I rarely went back during the long terms – so the Saturday league was just great. 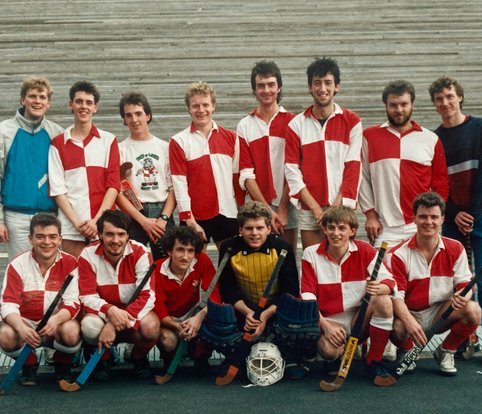 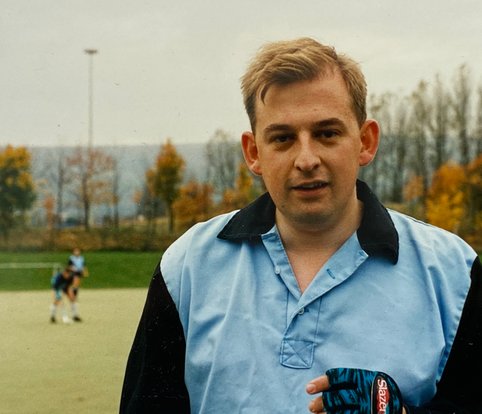 A summer at Newport HC… then onto Cardiff HC

My sandwich year in Newport led me to join Newport HC in order to train over summer ’87 with top ‘black & amber’ club guys Chris Brewer and Neil Maylan; even being invited to play for Newport in the Ross 6s that summer.

After graduating I joined Cardiff HC with fellow Poly grad Pete McConnell (aka Bob Geldof) and played my first game in 1989 for the 2nd XI… scoring the only goal to make a mark. CHC was based at Sophia Gardens with two grass pitches and one astro meaning that the clubhouse would be bouncing. I had one game for the 1st XI that year… we lost.

I captained the 4th XI for a couple of years, taking over the running of this social side from Jonathan Davies, whose brother Jeff was always there to support us. My typical team would be JD and John Hunt at the back. John was known to crack the ball waist high at any forward that upset him… then politely apologise to the umpire for ‘catching a bump’. Other 4th XI regulars at the time were Mike Chinn, weatherman Clive Mills Hicks, Jerry Shelton, RAF Duncan & Daz, Ali Marshall, Brian James, Simon Griffin, Stuart Brookes and a sprinkling of youngsters including young Shelts, Graham Hawkins & Scott Ramsay. Not forgetting Dave Parsons who would turn up for an odd 15 mins well into his 60s.

This was the era before email so being captain meant ringing around on Monday night, then chasing replacements midweek. It was usually impossible to raise a team on rugby international day and for a fixture like Pembroke Dock away you would mumble something about playing the other side of Bridgend, load up the car and put your foot down before anyone questioned what time we’d be home…

My last playing season was 2002-03 & my last game was Aberystwyth Uni away with less than a full team – we gave them the points, mixed up the teams and had a good day. Weirdly, we then watched the Columbia space shuttle disaster in the pub… it was a sign, time to give up! 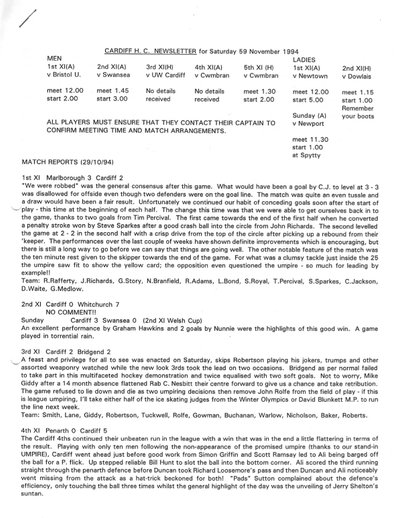 In 2000-2004 I was Chair of Cardiff HC, taking over from Ian Campbell, a hard act to follow. This was a tough time for the Club, we were homeless, short on players and teams. However, we pulled through and the rest is, as they say, history.

There were funny moments, not least the ‘Newent incident’ when a student who joined for one year was fed up with niggling tackles, the red mist came down and he (allegedly) whacked a Newent player with his stick. An elbow was broken, the umpire didn’t see anything and Bill Hunt on the sidelines  quickly subbed the player. The next week Glos Constabulary were on the phone to me pursuing an assault charge… however we pointed out the umpire did nothing so how could there possibly have been foul play?

In 2004, I joined the Management Committee of our parent body, Cardiff Athletic Club as one of two representative for the hockey section (with Steve Darwent). CAC has five sections however the key asset is the freehold interest in the 7-acre Cardiff Arms Park where Cardiff Blues Limited are the tenant. There is a longstanding claim from CHC for CAC to fund a new hockey facility, CAC having banked £2.4m when the half share in Sophia Gardens was sold to Glamorgan Cricket Club in the late 1990s. The bank balance has been whittled away and a resolution to Cardiff Arms Park always seems just around the corner… but the pledge is there and we will continue to hold CAC to account.

Workwise, I’m a chartered surveyor &, after many years working in Cardiff, in 2019 I established my own firm based on Treforest Estate. I’m just across the road from the Poly sports fields and find myself a Governor of the University of South Wales. I think that’s what you call that the circle of life…