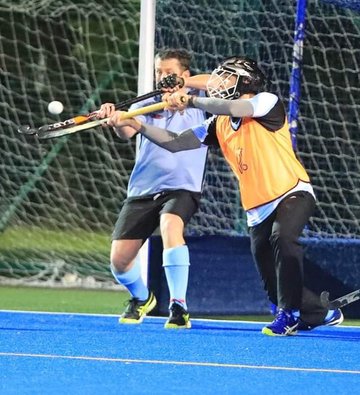 This months Legend is Jim Trafford whose profile makes for very is amazing reading. Jim joined after my operational days at the club but since, we have become good friends. Few will be able to match his achievements and track record and Im glad to say he is still involved with us to this day .

I had always wanted to be a one-club person but life dictated otherwise. Turning up in Cardiff at the age of 30 meant that my younger (better) years were somewhere else but such is the richness of our club that after 16 years of playing for it, it still feels like the lifetime club I had always wanted.

When I was 15 I ruptured and tore both cruciate ligaments in my left knee playing rugby and it was that which propelled me into playing more hockey, although I seem to recall playing on pretty much one leg for the first year after the injury. I lived in Bristol and Firebrands took me under their wing. The first team I played for was the Sparks captained (and enthusiastically coached on field) by Peter Mace, father of our great buddy Neil. I think Macey is a year younger than me but we played together in that team, a mixture of schoolboys and Peter’s generation: I always thought they must have been about 70 but they could have been no older than we are now…. Without knowing it, it was my first Cardiff Hockey Club connection.

By then I was working as a trainee solicitor in London and must have lost some weight as I did the London Marathon in 1999. I also played two seasons for Holcombe. This was long before they packed their team with internationals (as they do now) but it was a great club with lots of ambition. I recall we got into the South Prem, but we weren’t ready for the National League. However, the schlepp down to Kent twice a week was interfering with my social life (and/or I wasn’t playing well) so I hung up my boots playing proper senior hockey and joined London Wayfayrers. I had 4 happy years there playing for the “Heavies”, technically the 5 XI but with players ranging from ex national league to “ a very long way from national league“, but on our day we had a team which could shame the club 2nd XI. 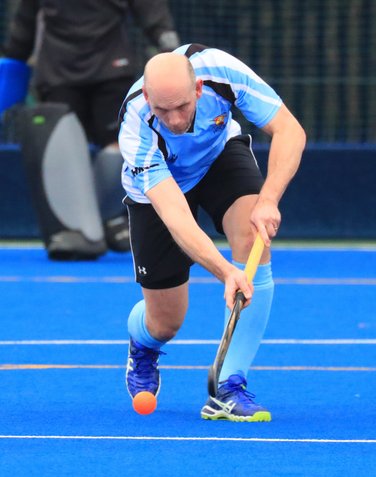 2004 saw us move to Cardiff and I joined Eversheds. Lee Ireland’s wife Fi, who worked at Eversheds at the time, got me in touch with the Club (it must have been Shelts). I played as much as I could with a new baby (the baby is now playing for our womens’ teams). Since then I have played for 2s to 7s and obviously the mighty vets. As I reached 40 I played eight games for Wales over 40s at two tournaments (The Home Nations and the Euros) in what was unfortunately a poor team - at least we had an ex Cardiff man in Reg Painter captaining us. The highlight of those tours was travelling out to Northern Ireland with CJ who was playing 45s and Nicko (Howard). I also played in the double header for Wales O35s v Scotland in a great team packed full of Cardiff stars (playing behind a certain Mark Ramage tends to help).

Back in the light blue of Cardiff and Met I am hopeful the hip will hold out for a bit longer. There have been so many great times. I am pretty sure I must hold the club record for the longest to travel for a game (835 miles from Faro to Bordeaux including two flights, I made it for the start of a midday game only to find it rained off). I have seen numerous Churchillian speeches from Neil Evans, enjoyed having Way Way as the ultimate wingman, marveled at Shelts’ ability to organize anything and everything, played in defensive lineups where collective baldness, age and weight have defied all the odds, wondered repeatedly why we have so many left backs and watched pretty much everyone lose the plot at some point…. Why would you want that to end……?

One of my favourites. I came back on having injured my hip to play kicking back after Clevs was red carded. We kept this goal out in the last 30 seconds to win 2-1.  Nezza and I never resolved who actually deflected the ball over the bar. It was me (obviously).