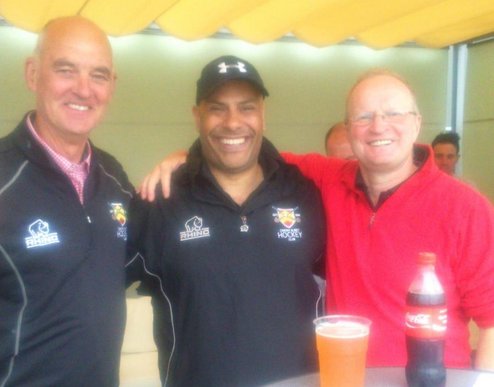 I am delighted to include in the Legends “hall of fame” Martyn Gallivan. Martyn was playing in the lower ranking mens side at the time I first joined Cardiff as a schoolboy. Always a genuinely likeable character with a great sense of humour he was part of the club “scene” back in the day and was one of the reasons a lot of us then kids new to the game stayed at Cardiff. His achievements in the world of umpiring are second to none and it is great to see him back in the Welsh fold .

I played my first match for the 5ths (captained by Chris Fooks) against Brean. We lost 6 – 0. By the end of October I had progressed to the 4ths and in my first match (against West Gloucester 4ths) broke my left index finger. Unable not play for several weeks, I took up umpiring and the rest is a matter of history. I did carry on playing partly that season, making it to the 2nds on a couple of occasions.

After moving to Weymouth, I did play once for their 1sts and played a few matches in the Dorset Indoor League.

I carried on umpiring and did my best to spoil as many matches as possible, especially those that Gows played in. As part of my missionary work in the outback of that far flung land the other side of Offa’s Dyke, I became a national umpiring selector, responsible the panel of umpires for the Men’s Premier Division.

Going back to Sophia Gardens for a beer after a match on Saturday, and sometimes on a Sunday.

Special people from the past

Recently retired and have moved back to Whitchurch, where I grew up and went to school.

I started work as a Graduate Assistant Engineer at Mid Glamorgan County Council, moving onto the British Transport Docks Board at Barry Docks, and then on to Weymouth & Portland Borough Council, where I rose to Borough Engineer and Head of Technical Services.

From 1994 – 2010 I held various Competitions Secretary roles in the European Hockey Federation. This included liaising with CHC when they hosted the Women’s Cup Winners Cup. I was also on EHF’s Appointments Committee.

I took early retirement at the end of 2009 and within 3 months was head hunted for the role of Competitions Manager at FIH in Lausanne, Switzerland. During my ten years with FIH I was responsible for the operational management of FIH’s competitions, including Olympic Games. This involved ensuring that the relevant Tournament Regulations were update, compiling match schedules, issuing all relevant tournament documentation (there was loads!),liaising with hosts and competing teams, confirming entries for all FIH competitions (this included the World League, which Wales played in), updating the FIH World Rankings after each relevant competition plus others, which I have obviously forgotten about. I retired from that post in March 2020.