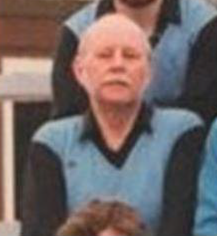 I was wondering who it would be that I remembered as the oldest member to ever have appeared on the park for Cardiff. Older members may recall Mervyn Griffiths. Mervyn sadly died many years ago and my own memories of him have largely faded in time so this profile will take a slightly different path. What I do recall is that he was long past his prime even back then in the late 70s early 80s and to us then schoolkids appeared “ancient." No matter, Mervyn turned up for the club week in week out regularly in the 5th or  6th team and gave it his all . I played in goal behind him as full back a number of times and had to be acutely aware of his lack of turn of speed when the opposition launched an attack. I also recall him buying me a half of bitter in the club bar on numerous occasions – a pint not being a fitting reward for a 15 year old in those days !!

I was approached by a guy named Ray Palmer who is writing a book on the family Mervyn and he were/are part of and this is set out below. It is not generally hockey linked but provides a fascinating insight into this Legend of a man who fought at the front line to save his country .Anyone with any further info on him should e mail me on swendab@protonmail.com and I will seek to update this profile with any contributions made.