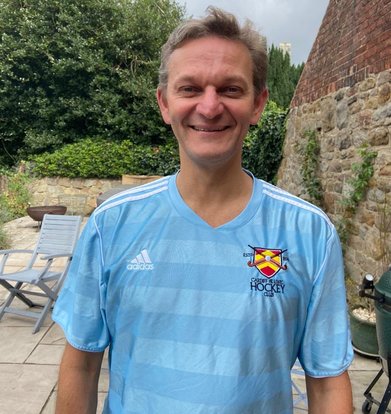 This month meet Jon “Reggie” Painter and his wife Debbie.If you are allowed to have a best friend at my ripe old age then these guys would tick the box! Jon’s era as club captain was probably the most defining time in turning the club around from struggling to a national force to be reckoned with. Debbie likewise was one of the stalwarts in the ladies section for many years. Both were simply awesome tourists and I am proud to have spent some of the best days of my life with these fantastic people.

I joined Cardiff Hockey Club in 1887 as a schoolboy and was immediately given the nickname of Reggie, the reasons for which are lost in club folk-law. It was towards the end of the 'great era' described previously by club legend Tim Percival when the club was centred around the Sophia Gardens clubhouse and hockey was just beginning to transition from grass to the new 'astroturf'. I worked my way up the club teams gaining my first 1st X1 game in the 1989 / 90 season under the captaincy of Tim Percival.

Armed with all that Cardiff Hockey Club had taught me I spent the early to mid 90s at Loughborough University followed by a short stint working in London. However in 1998 I returned 'home' bringing Deb with me and we both immediately threw ourselves back into life at Cardiff Hockey Club.

It was apparent however that the mid 90s had brought a rather barren patch to Cardiff with Whitchurch dominating domestic hockey who resided numerous leagues above Cardiff. I took over the captaincy in the 1999 season and then began a rebuilding exercise led by Bill Hunt, Mark Shelton and...which included the introduction of overseas players . Yes this was the beginning of the onslaught of the 'Kiwis'.

The result was a dramatic turnaround in fortunes and Cardiff climbed the league structure year on year and by the end of the period of my captaincy in 2004 we were now the dominant force in wales hockey once again, regularly beating Whitchurch to win the national competitions. With National Championships came European trips and more memories. Maybe the lasting imagine of these is a crowd of local Belarussians chanting 'Nyet, Nyet Soviet' during our game against the Russians. Only problem was our Tour Manager Bill Hunt was key ringleader of the proceedings!

Deb meantime was a key member of the Ladies 1st X1 who during the same period had success themselves, competing in two European Championships during 1999 - 2005, one hosted by us in Cardiff, the other in Vienna. 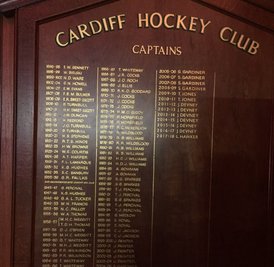 Both myself and Deb were always active club members on and off the pitch. My upbringing included the rights of passage that was 'The Bulgies' (with both of us becoming regular tourists) and for those that were around who can forget the infamous 'Ladies Night' at Minskys Nighclub, organised by Deb to raise money for the ladies European trip to Vienna which involved the star turn from 'The Full Ponty'!

We now live in Derbyshire, we are both actively involved in the Wales Masters Hockey and I currently play at Beeston HC. However Cardiff remains my club at heart and I still watch 1st X1 games on weekends when I'm down for Wales Masters training and we are both convinced or hockey career will still ultimately end at Cardiff leaving more chapters to write... 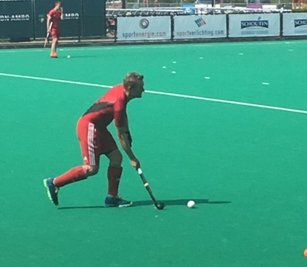