This is something of a special when it comes to Legends. I wonder how many current members are aware that the current Lord Mayor of Cardiff was a long time Club Member? I was lucky enough to join Rod McKerlich for a chat about his times at Cardiff HC in his home in Radyr where it was fascinating to hear his recollections of those “halcyon days”. 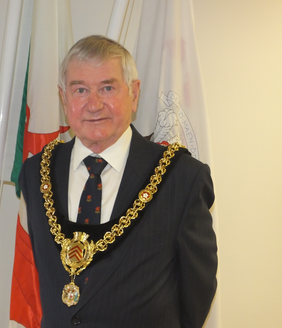 In contacting Rod, I was at first baffled as to how to address a Lord Mayor. Was it your Highness? Your Worship? Grand Master? Head Wizard? Google tells me it’s just Lord Mayor but on arrival at his lovely home I settled for simply Rod!! This worked and I was forgiven any formalities associated with his esteemed office and welcomed in. Such is the nature of the man, truly down to earth and personable.

Rod joined the club when he moved to Cardiff aged 29 in 1974. He had secured a job with a small company in Treforest. At this time the company was embryonic but grew rapidly and following a reverse takeover went on to become a national quoted concern. Rod recalls “the company taking over initially had only two customers of any worth” these being London Rubber – whose famous brand was Durex! and Benson and Hedges!

I asked Rod what the attraction of Cardiff HC was and why he joined us rather than another club? “Without a doubt one of the main attractions was the pitch at Sophia Gardens, it was surely one of the best in the country”. As older members will recall in those days, we played on the Glamorgan Cricket Ground in the winter months while the county cricket side borrowed it in the summer. Naturally the playing surface was maintained to an immaculate standard and Rod was right, there was barely a better grass hockey surface in the UK at that time.

Rods first game for the club was against Bream where he played on the left wing under the captaincy of the great Phil Horsfield. In this game he missed out on a hattrick (being a Scotsman I guess this was deliberate, as it was club tradition that anyone who did bought a jug of beer for his teammates!). He was in good company that day and reported that even the Legend Steve Sparkes missed 6 easy scoring chances.

“In those days (he told me) we played a strict 11 player team as no substitutes were allowed and operated a 4-3-3 system. I played in every position on the park for the first team, except goalkeeper and repeated that feat later for the second team." This reminded me of what we used to call a “utility player“ – someone who was good enough, and had to be in the team but didn’t command a position week to week .He took this accolade into his final season with the club where he finally did get put in goal for the second half of one of the games.( Rod)  “In that match I touched the ball twice – both times to remove it from the back of the net.”

Rod became club Captain in 1976 - 77 when the rules were changed to allow substitutes .His memory of this seemingly good development was “as a skipper it was a real pain knowing just when to bring a guy on and take one off with all the post-match squabbling and argument that would inevitably confront me” players back then saw being subbed off as a personal afront rather than as being for the good of the team, so you can appreciate his sentiments .

Rod enjoyed his share of European Hockey and played in a European qualifier in Gibraltar which he recalls as “a massive drinking session”. Nevertheless, Cardiff qualified and went through to the finals in Amsterdam where things went not so well “we came 12th out of 12 and Roger Self OBE (manager of the GB Squad that won Olympic gold in 1988) at the time said, with characteristic understatement, “Cardiff were a disgrace to the Welsh nation."

In his year as captain, he led the club into a European qualifier in Sweden where he recounted memories of quantities of Gin and Vodka finding their way, after the matches, into the Swedish Sauna – along with choruses of Sosban Fach. Such was the celebration attending high level hockey back in the day.

Then there was the famous Beckenham Weekend – this was an annual jaunt by Cardiff HC to the Southeast to play against a major London League club who usually boasted a smattering of England and GB internationals. Cardiff itself had several recognized internationals and GB players including Bryn Williams who Rod called “the brain”, Howard Williams “the talent “and none-other than the great Peter Mills who was undoubtedly the best Goalkeeper of his generation.

During one Beckenham game, Mills deliberately wound up the striker ahead of a short corner. The guy was a renowned corner specialist known in international circles to Mills who delivered the ball like a bullet. The now angry international prepared a monster strike after the ball was (as was the way in those days) hand stopped at the top of the D by a member of the attacking side. Going headlong into the barrel of the gun, in defense of the corner, was Rod Wildblood running 1 and Rod himself going 2. “ Wildblood that day was a curious mixture of courage and stupidity “ said Rod  “my approach was somewhat slower and wider” . The resultant almighty shot was brilliantly saved by Mills, who subsequently totally missed the follow up duff shot which just about crawled across the line.

Another famous match we spoke about was the second team cup final where Cardiff were 1-0 up in a tense match against Whitchurch . The match umpire was Martin Gallivan (CHC club Legend himself and now President of Welsh Hockey) blew the whistle for the end of the game and Skipper Channi Kaler led his seemingly victorious team off the pitch and into the changing room. Gallivan then “somehow noticed “that there was still two minutes to play. With half the side on its way to the clubhouse / changing rooms he tried to recall the teams to playout the remaining time. Channi refused and stormed off claiming victory – with mixed feeling amongst the Cardiff players as to the best course of action. The Cardiff team did not oblige and went off to celebrate. As ever, the matter went to Welsh Hockey ……and (you know what’s coming next)– yes, a replay – and guess who LOST!!

I asked Rod about players he remembered back in the day along with the internationals mentioned above. He listed “Tony Rhys Jones, Mike Giddy, Ian “Chopper” Turner, Peter Davies – and school kids Pip Rees and Jonathan McKendrick who he regularly drove into the club from Radyr on a Saturday. It was rather a touching remark that he added “we had 5 or 6 different nationalities and religions of players from all walks of life who always got on extremely well.” He added “I remained a playing member until about 1987 – I enjoyed my time with Cardiff Hockey Club and now, watch with wonderment how the game has changed “

I had a delightful afternoon with Rod and was pleased to meet Sue, his longtime wife on my departure. She has lost none of her wit and charm that I recall from all those years ago.

Rod has for many years been a mainstay of the local community in Radyr where he is a member of the tennis and golf clubs and is a keen bridge player. He was elected to the Cardiff Council in 2006 and is the current Lord Mayor serving until 2022.It is an honor and a privilege to include him in the club Legends section.