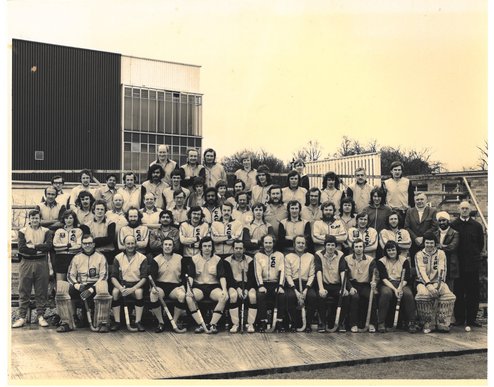 I joined CHC in 1973 when we returned from South America. My father, Geoff, stayed behind for a few more years before retiring. He was a member of CHC in the 1940s, hence I joined and was first looked after by Mervyn Griffiths along with Mervyn Greenwood and other elders within the club. The photo in black-and-white is from 1973 and I'm standing bottom left, second in. The only player in this photograph still playing is Nunnie. Sadly, many of those in the photograph are no longer with us!

My mum, Renée was one of the volunteer tea ladies along with Jean Griffiths, Mervyn's wife. This was a significant part of the club and we had a rota of family and friends who gave up their time to make tea, cakes and biscuits on Saturday afternoons.

This was a great era where we had the clubhouse and played on the outfield of Sophia Gardens county cricket ground. I was a founder member of the 5th 11 at age 14 and started off playing in goal, which is how I began my hockey playing days in Chile. I realised at a young age that it was a tough pastime playing in goal with adults and soon decided to play outfield.

I reflect back on the game then, which was played on grass and had roll-ins, bully- offs, obstruction, off-side and sticks! How's the game has evolved!!

The next photo is taken in the late 70s (can't recall the exact date). However, many of the players are still with us and still playing, notably Steve Way, Bill Hunt, Steve Sparkes and Nunnie.

The late 70s and 80s were a fantastic time to be in CHC. There was a very strong grassroots membership with many key influencers. Tony Rhys-Jones was a key figure of this era of the club, bringing many initiatives forward and chairman. A great mentor, highly competitive and totally dedicated to the club.

A group of youngsters, of which I was one, along with Bill Hunt, Steve Way, Pip Reece, Jeremy Fry, Andy Rhys-Jones and Steve Fleming (all in the above photo), were all pushed through into a development squad to bring us on. At the same period, great established players joined the club, notably, Howard Williams, Andy Gowman, Bryn Williams and many other stalwarts.

The 1980s and 1990s were an incredibly fulfilling and intense hockey era and dominated our existences, creating a united social and sporting squad.

I started university in 1981 training as an architect and played for Cardiff University during the week and represented the Welsh Universities Team. I can’t believe I managed to commit so fully to sport, enjoy a very full social life and still qualify as an architect in 1998 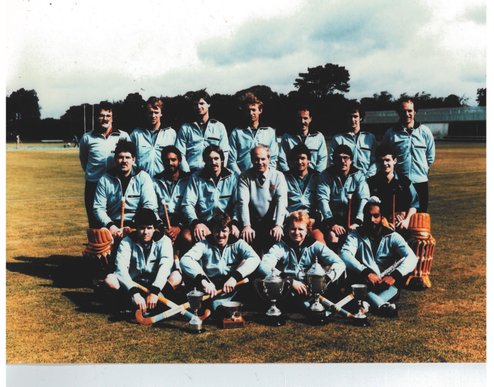 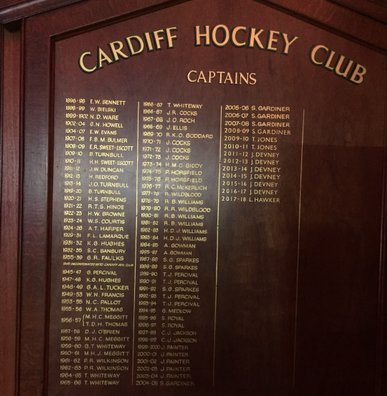 I was plagued with problems with my right knee from relatively early in my hockey career. I had my first piece of cartilage removed age 24 and have subsequently had numerous operations culminating in a knee replacement. This, along with other stresses gave me lower back issues resulting in a plate in my lower back. They say sport is good for you!

My last few seasons of playing were for the 7th 11 under the captaincy of Mark Shelton, a team comprising Cardiff Golden Oldies and up and coming youngsters. This led to a very successful outcome with key players such as Nunnie, Sparksy, CJ, Way-Way and myself enjoying great camaraderie along with wining!

I also represented the Welsh Hockey veterans at over 40s, 45s and 50s and eventually was forced through my knee to stop playing

I moved to London in 2015-16 as a partner of a Powell Dobson architectural practice (Wyndham Powell also played for CHC back in the day). I still remain in touch with many of my long-standing friends from the club. My 60th birthday (next photo) was a lovely occasion, bringing many of us together last year. I am to be married next May to my beautiful and loving partner Jools.

I could write reams about CHC and the happy, proud times that I have enjoyed there. The friendships and bonds run deep. Maybe one day I will play again as a super-vet!

The ladies’ section was introduced and became a great extension to the club, along with a fantastic social environment. Saturday nights became legendary with the bonding of the two sections. Just sticking on the social side, regular attendance at hockey festivals and tours became a significant part of the club culture under the leadership of Bill Hunt, with the creation of the touring side, the Bulgies. We attended festivals at Easter, Whitsun and many other memorable and mad weekends.

This was a real contrast to the serious commitment to playing for the club. I came into the first team along with some of my young peers and we enjoyed amazing success both playing indoors and outdoors. I was fortunate to be invited into the Welsh International Arena playing for the Under 21s and becoming a part of the Welsh outdoor training squad. I was sadly never kept outdoors for Wales at senior level, however enjoyed over a decade of training weekends and Dragon’s commitments.

Indoor hockey was a major part of my hockey career both with CHC and internationally. I was fortunate to join the Welsh side at possibly the height of indoor hockey in the UK and Europe. I obtained 55 Welsh caps and I am very proud to have captained the side for 2 years.

The club first team enjoyed fantastic success both indoors and outdoors winning South Wales, Welsh leagues and cups which qualified us to play in numerous European cup campaigns. It was a period of full-on commitment with training, matches, training weekends and tournaments. Most weeks involving training and playing 5 times per week

The photo below (I cant remember the exact date) in the early 80s is of the first team with a collection of silverware! This team was very much part of a squad enjoying many European campaigns to Gibraltar, Sweden, Yugoslavia, Poland and other destinations. 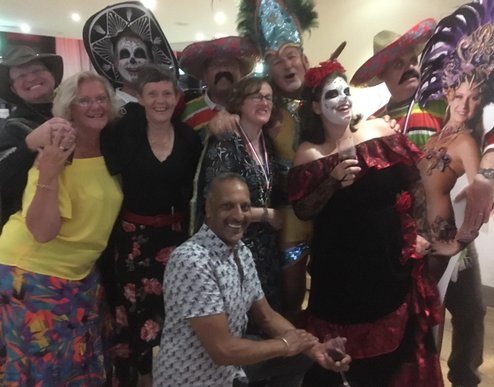